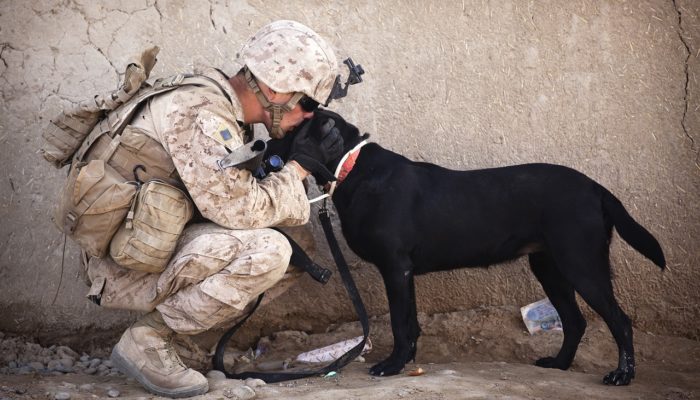 “As soon as wolves and humans met on the trail of big game, they started traveling together, and they’ve been at it ever since,” said Mark Derr in an interview with NPR. Dogs and humans have been living in partnership since prehistoric times, collaborating by herding and hunting together, and coexisting in a symbiotic relationship. Humans have bred and trained dogs for an assortment of tasks and jobs, and dogs have benefited from our food, care, and medicine for centuries. Today, dogs are still at work in many unexpected areas of human life, including working as therapy and companion animals, and assisting those with physical disabilities.

Of course, most are familiar with dogs as family pets. Although being a lovable pet is a classic job for a dog, dogs can also be valuable in therapy and as trained companions. Many licensed therapy and companion dogs are trained specifically for individuals with psychological disorders. You might see therapy dogs working in public, such as in a restaurant or at the mall. It is important that these dogs can go everywhere their human goes, to give their partner consistency and grounding as their environments change. These dogs can be used by patients of a variety of disorders, such as Autism and Post-traumatic Stress Disorder.

Post-traumatic Stress Disorder, or PTSD, is defined as a damaged emergency response in individuals that have suffered from a traumatic event (“Post-Traumatic Stress”). Many of these victims are veterans of the military that have developed this disorder as a result of intense combat situations. When soldiers return home, PTSD can cause normal life to be filled with triggers for anxiety attacks. Anything from a fireworks display to a quarrel with a family member can incite an attack. During these panic attacks, victims imagine they are suddenly re-living the moment of the original trauma, and their brain begins to react with a “fight-or-flight” response. These sudden transitions to a false reality makes living a normal life impossible for many veterans with PTSD. In this situation, it helps to have someone present that can bring them back to reality.

In addition to regular counseling and therapy, a dog can aid in coping with this disorder by keeping their emotional state at peace when something triggers their anxiety. A dog will sense that its partner is anxious and will jump up, tug the leash, or lick their skin to force the human’s attention back to the present (Low). The dog gives the victim comfort and reassurance, keeping him grounded in reality. Having the dog present at all times ensures that the PTSD patient is able to regain a more balanced lifestyle, in spite of his disorder.

Therapy dogs are beneficial to victims of PTSD, but they are also helpful to patients of a different breed of disorder: Autism. Children with Autism Spectrum Disorder typically have restricted lifestyles and difficulty forming social connections due to deficiencies in social interaction and communication (“Autism Spectrum Disorder”). They can also become endangered in many environments due to their inability to interpret social cues, or because of their unusual behaviors. However, studies have shown improvements in children with Autism when a therapy dog is introduced. In one study, scientists state:

… the contribution of these animals extended beyond children’s physical safety to therapeutic and communicative domains. In fact, the integration of assistance dogs resulted in beneficial effects on children’s behavior with decreased anxiety and anger, increased calmness, reduction in the number of emotional outbursts (tantrums), and more manageable bedtime routines. (Berry, et al. 74)

The presence of a companion dog not only helps the child to remain safe and independent, but allows the entire family to feel more peaceful and secure. It alleviates stress and embarrassment in public, allowing the family to be more involved in their community. In the same study, Berry and company found that therapists can use dogs to help a child with autism by structuring activities for the child and the dog to interact. In these scenarios, “interaction with dogs was able to dampen social isolation and withdrawal in children” (75). Adding a dog to a family with an autistic child can greatly improve the quality of life for the child, and for the family. However, psychological therapy is not the only job for a dog.

In addition to therapy and companionship for psychological disorders, dogs can be especially helpful to individuals with physical disabilities and impairments. Assistance dogs can complete small tasks, such as retrieving objects, replacing fallen items, putting things away, and opening doors. This enhances the life of a disabled individual and helps him or her to function better at home and in public (Falvo 490). An individual who is restrained to a wheelchair, or has difficulty bending, walking, or controlling movements, can benefit from having a dog to help them with daily activities.

On top of this, one of the largest subgroups of disabled people are those with blindness. An unpublished study from the Guide Dogs for the Blind Association states that around 20% of blind people in the UK never leave their home alone due to their impairment (qtd. in Whitmarsh 28). This same article reported that owning a guide dog can be a solution to this problem, as dogs not only offer increased mobility and independence, but also companionship and security. According to some, most blind people prefer to use a guide dog rather than a cane which makes them feel more isolated and self-conscious (28-30). Guides are, most obviously, used to warn a blind person of obstacles. However, the companionship of a dog is invaluable.

Having an assistance dog helps to ease social situations for individuals with disabilities. Basic tasks of life are already difficult for a disabled individual, but the social stigma surrounding a disability makes socializing and connecting to a community increasingly hard. One study by L. Whitmarsh discusses the evidence that assistance dogs “provide a range of functions– practical, psychological, and social– which directly and indirectly improve the health and quality of life… of their users.” Over a third of guide dog users feel they have a better social life, and are more respected and approachable when they are with their guide dog (29).

The wide range of skills that dogs possess help humans in other ways, of course. Dogs are able to smell far better than a human, which gives them the unique ability to detect illegal drugs, cadavers, and missing persons. They are able to fight in war zones, herd cattle and sheep on a farm, or hunt alongside humans. In addition to their great work ethic and dedication to the job, dogs also provide companionship, endless loyalty, and unconditional love to humans. They have been doing so for centuries in this symbiotic relationship between man and man’s best friend.